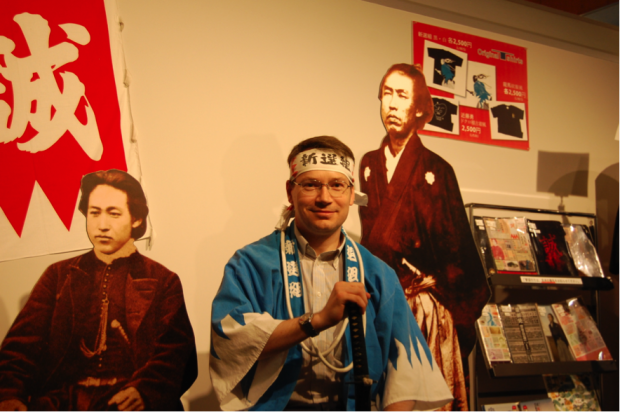 Here is a picture of me at the Museum of the Meiji Restoration in Kyoto in 2012. I am flanked by two of the key figures of the Bakumatsu Period (1853-68), Hijikata Toshizo (left) and Sakamoto Ryoma (right). I am behaving like a fairly typical contents tourist: I am having my photo taken in costume at a site related to historical characters in whom I have a deep interest.

I was in Kyoto doing research for a paper on the economic impacts of Taiga Dramas (epic historical dramas produced by public broadcaster NHK that air weekly for a calendar year). I was collecting data about the numbers of people visiting the museum in years when there was a Taiga Drama from the Bakumatsu period broadcast on television. I found there can be very significant rises in visitor numbers in such years.

When I travel to do such fieldwork, strictly speaking I am “working” (things learned on my travels feature in my university lectures and academic publications). However, I am aware that to other people it probably looks like leisure, or as if I am simply a fan and/or tourist. Indeed, my activities are counted by others as if they are tourism, not work. On my trip to Kyoto I was one entrant to the museum, spent a night in a hotel, and asked for information in the visitor centre. While working, I may also act like a tourist, for example by buying souvenirs to take home to family, friends and colleagues.

However, while my behaviour looks like “tourism”, actually fieldwork is an essential method for gathering materials and ideas in preparation for both teaching and research. Academics are supposed to generate new insights into the world around us, and there are some things that can only be learned by getting out of the office and/or university library and spending time traveling in the “real world”.

Distinguishing “academic fieldwork” and “travel by fans” can be very difficult on occasions. Academics have a deep interest in something and we dedicate large portions of our lives to learning as much about it as we can. Part of this investigative process involves traveling to various places. Fans who travel to pursue their interests are doing basically the same thing. Do not feel intimidated, therefore, about sending your experiences as a traveling fan to an academic journal. Ultimately, the Postcards section of IJCT is a place where fans of various kinds can come together to share their stories.