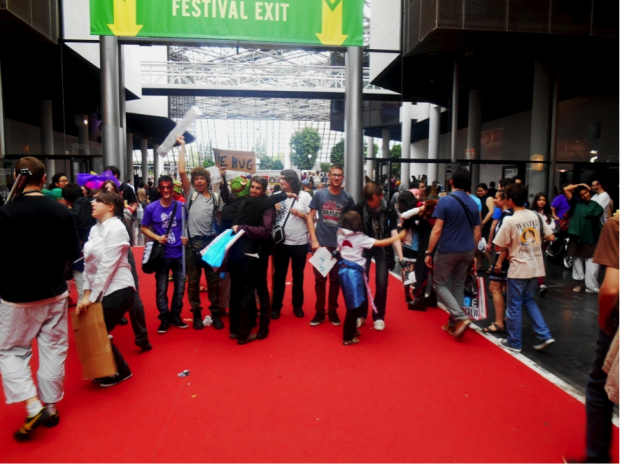 ‘Free Hugs! Free Hugs!’ that’s what the group on this photo was asking for!

It was during Japan Expo, the biggest Japanese pop culture event in Europe, in 2014. French fandom gathers every year in July at this convention, to enjoy various activities like cosplay, quizzes, karaoke, anime screenings, concerts, fashion shows, tasting Japanese food and so on… and of course to spend a lot of money buying many goods. The event is explicitly dedicated to ‘Japanese culture’, but there is one thing that is neither Japanese nor French, but a strong tradition of the event: Free Hugs.

The movement was originally created by an American man in 2003, spread all over the world, and then was forgotten. But not at Japan Expo, as many ‘free huggers’ come every year with their boards, or just write the message on their clothes or skin, sometimes with interesting variations ( ‘free kiss’, ‘free (phone)number’ or even ‘free sex’ …). Sometimes they gather together and ‘demonstrate’, like the small ‘protest’ we can see in the photo. That day, I heard them saying quite loudly ‘Free Hugs! Free Hugs!” and walking around in the hall, clearing a path through the crowd and waving their boards, so I followed them as did many bystanders and finally got a photo of part of the group standing at the festival exit and welcoming potential huggers.

Every time I visit Japan Expo, I feel that the movement is getting bigger, and many visitors told me that Free Hugs was one good reason to come to Japan Expo, from everywhere in France and even from Belgium! It is even said that there is a counter movement, ‘Free Hugs Haters’, who also demonstrate sometimes, but I have never seen them. Maybe it’s another urban legend…

Whether people like it or not, it seems that Free Hugs has become a tradition of Japan Expo, one of the things that make this event unique.