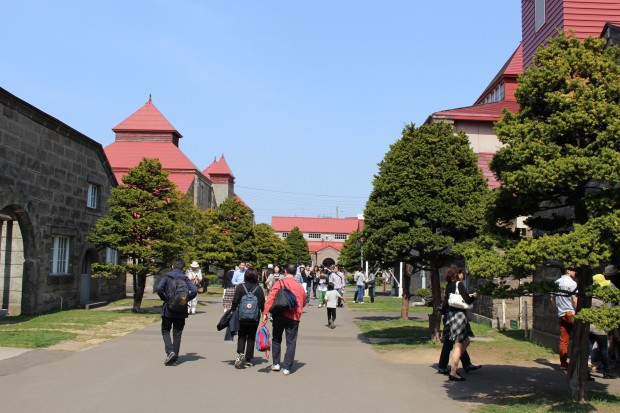 On 24 March 2015 I went to an event in Sapporo at which the stars of the NHK morning drama Massan (broadcast September 2014 to March 2015), Tamayama Tetsuji and Charlotte Kate Fox, said thanks to their Hokkaido fans. Much of the drama, based on the real-life story of whisky-maker Taketsuru Masataka and his Scottish wife Rita, had been set in Yoichi, Hokkaido.

The event included some of the music from the drama performed by the composer, Fuki Harumi. I had often thought the music really added to the enjoyment of watching the drama so I bought the two soundtrack CDs at the end of the event. It seemed like a bit of an expensive extravagance at the time, but the CDs quickly became a family favourite. The soundtracks contain a wide variety of music styles and there are many memorable tunes.

During Golden Week, we decided to have a day out in Yoichi. We had been a number of times before, but this time we took along the CDs to listen to in the car. By the time we arrived in Yoichi we were completely in “Massan mood”. Yoichi looked just like it had before, but it felt like I was visiting a new place, one for which I had a new musical affection.

Apparently, many people do what we did and at the moment the Massan soundtrack is played in many cars going between Sapporo and Yoichi. The Nikka Whisky distillery was more packed with visitors than I have ever seen it before. The drama may have finished, but Yoichi is going to be a popular day out for many people this year.